Last week the Willamette Valley got hit by a winter storm that dropped several inches of snow. Portland has only a few snowplows, people don’t know much about winter driving, and many don’t use snow tires, so the city shuts down with even a small amount of snow. 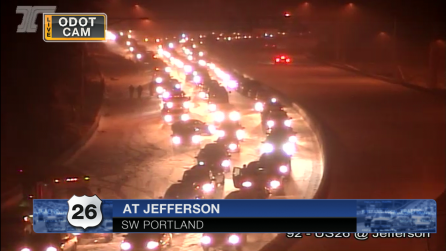 This recent storm hit at midday, so school was open and people were lulled to work thinking … well, not thinking about their commute home until the snow started sticking about 1:00 PM. By then it was too late. I left work on my bike soon after and Naito Parkway was already locked up with traffic. I heard stories of hours-long waits to go a few miles. Highway 26 over the Sylvan Hill out of downtown became an obstacle course of abandonned vehicles. Some steep local streets had multi-car pile-ups with cars wedged sideways. 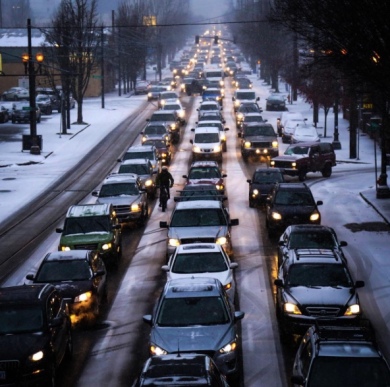 My commute home was pretty uneventful. I had to ride carefully since it was starting to get a little slick, and frustrated people in cars were diverting to the neighborhood greenways to circumvent stopped traffic – this created an additional hazard – but my trip took no more than a few extra minutes. I always knew that if it got too slick to ride, I could always get off and walk, pushing my bike home.

Our cities have grown in ways that were not possible before cars. The idea that you can live so far from work that walking home is unthinkable … well, that would have been unthinkable only 75 years ago. Cities were at one time limited to a scale where you could walk. This was expanded by the streetcar, but the automobile has radically skewed our perception of distance. There is little awareness of how strange these times are.

Health benefits of biking and walking to work are obvious, and a good reason to live close to work. But the resiliency of living close enough to walk and bike comes into play at unexpected times. This snow storm provided a taste of what happens when our road system breaks down. Portlanders, if you had problems on your commute because of a few inches of snow, the Cascadian subduction zone earthquake is really going to screw up your life. You might want to rethink where you’re living and working.

1 thought on “Car Dependence and Catastrophe”